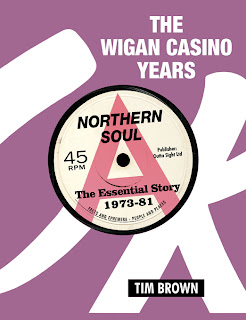 Northern Soul came of age in the mid-seventies. The first significant underground music scene in the UK came to the notice of the media and public alike in 1977, a television documentary endeavoured to capture the spirit of thousands of youngsters dancing all night to obscure, rare American soul records - which even then were up to a dozen years old. The Wigan Casino Years documents, illustrates and analyses the golden age of Northern Soul from 1973 - 1981.

Writer Tim Brown experienced those years as a top collector and later became a leading record dealer, label owner and documentor of this, perhaps the most idiosyncratic and secretly influential of musical formats. With high quality graphics and full colour throughout, this book confronts the modern age with the real truth and will fascinate both the devotee and curious at the same time.

We believe that this is the most significant book about Northern Soul ever to appear. Here's what Record Collector and Echoes magazines had to say:

"The Casino story has oft been told, but the "Years" part of the title is crucial: Brown chronicles developments in the NS world year by year at Wigan, Blackpool and beyond, and offers his critique of each year's pivotal records: some, like Frank Wilson's "Do I Love You", still revered today, others, such as Paul Humphrey's "Cochise", soon consigned to the musical dustbin. The author speaks with authority and pulls no punches in his assessments of records and people, making this hardback an informative and absorbing read. Designed by Glenn "Joe Boy" Gunton, who has incorporated a wealth of memorabilia, press cuttings and label shots into its colourful pages, it's one of the most handsome music books ever published, too."
****1/2 Mike Atherton Echoes, Record Collector

Order your copy today from www.raresoulvinyl.co.uk